Hello Crafty Peeps, and welcome back to my corner of Blogland.

Before I start, just a warning that this is a long post, with five card descriptions.

Today's post is another AECP Level 2 submission, based on Therese Calvird's class 'With a Twist'. In this class, Therese demonstrates several ways to take an alternative look at the supplies in your stash, with new ideas for getting more out of your current supplies. It is a useful exercise and a lot of fun, too!

Whilst Therese's projects use Altenew's stamps, I chose to use a layering stencil for my submission and one of my favourites is the new 'Polka Dot Buds' two-layer stencil. As you will see, the stencil is split into two parts - the large, regular polka dot pattern and the leaf and small polka dot pattern. I thought it would be fun to use the two layers not only together but separately to see what results I could get.

A list of all the supplies I used (for those I know, at least) is at the end of this post, as usual.

For this card I used the stencil in its intended form. I used inks from my stash - mostly Lawn Fawn and Nuvo - as my Altenew inks have been used so much they are drying and need to be reinked. I love the sunflower vibe from the bright orange and green. 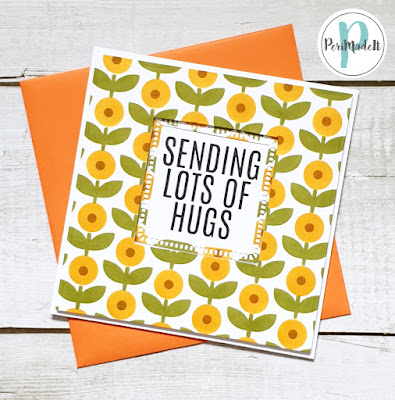 The only 'twist' I put on this card was to cut out a square in the middle to frame the sentiment, which comes from a Simon Says Stamp set called 'XL  Greetings 2 - All the Feels'. I used a little frame die from my stash (which I think might have been a freebie, along the way) to cut the square, and used the narrow frame around the sentiment.
This is a 6" x 6" (15cm x 15cm) card base and I cut down the stencilled image a little smaller to leave a narrow white border around the card.
I popped up the outer frame on some fun foam for dimension, and made a co-ordinating envelope to finish.

Originally I was going to simply use the stencil with a different colour way, and the result was quite lovely. But I had an idea to mimic the flower shape to add to the card, and this is what happened! 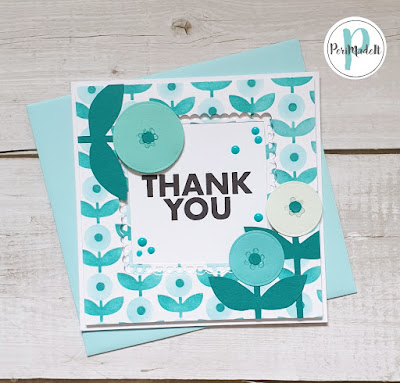 Apologies for the photography - I didn't get decent shots because this card was rushing out of the door to its recipient! The blues are quite vibrant in real life.
Again, I used a little frame die (part of the same set I used for card one) to cut out the centre, and the same stamp set for the sentiment. I popped up the outer frame on some fun foam for dimension and used the little frame around the sentiment on the card front. I added some Nuvo Crystal drops in 'Caribbean Ocean' around the sentiment and some 'Sea Breeze' Nuvo Jewel drops around the flower centres.
I am on the bench about this card - perhaps it would have worked better if the flowers I made had been a little smaller. 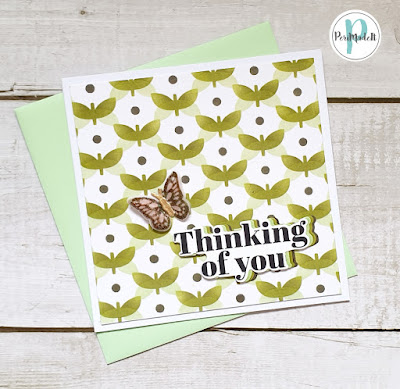 I had the feeling of wings when I looked at the finished pattern, so I heat embossed a little butterfly onto vellum as the only embellishment for the card. The stamp was from the Concord & 9th 'Bold Butterflies' set and I inked it in black then embossed it with a holographic powder from my stash.
Using the same sentiment stamp set I stamped 'Thinking of you' in simple black on white. I die cut the sentiment and then also die cut again three times from white card, inking up the edges with the colours of ink I had used, and offsetting each layer behind the sentiment for an extra detail.

I thought the solid shapes in this stencil would lend themselves to heat embossing, so that was the focus for my next card. I rarely use black for my backgrounds, so this was an opportunity to do something completely different. 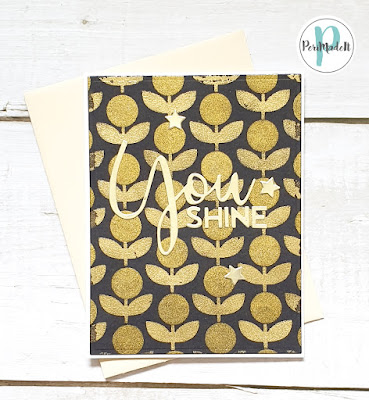 I used Altenew's gold pigment inks - 'Enchanted Gold' for the large polka dots and 'Antique Gold' for the leaves - and laid down a solid layer through each layer of the stencil with a foam applicator. I then used clear embossing powder to set the ink and preserve the two colours of gold.
All this card needed was a simple, bold sentiment - I used Simon Says Stamp 'You Shine' die and cut this from gold mirror card. I also cut three small stars from the same cardstock, to act as little highlights.
A pale gold envelope finished off this striking card - I'm really pleased with the end result.

My final card in this set uses only the large polka dot layer of the stencil and I used Altenew's 'Martian Terrain' ink set to ink an ombre background. 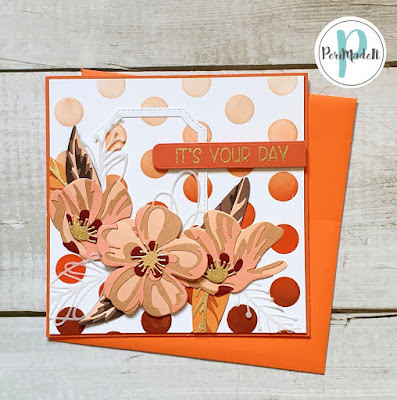 I created flowers and leaves using Altenew's 'Craft-A-Flower: Cistus Layering Die Set' in co-ordinating colours, with pops of gold. I also cut additional leaves from vellum using Altenew's 'Leaf Mix' die set, and used a die cut frame that I had left over from another project. I played around with the elements until I had an arrangement I was pleased with and then stuck everything down, using foam dots to lift the centre flower for dimension.
I used a scrap of orange cardstock and gold embossed a sentiment from Avery Elles' 'Banner Bits' sentiments stamp set to finish.
Well, that's it, five very different ways to use the same stencil - I think that's quite a twist, isn't it? And not a single sequin in sight!
Thank you for your time, Peeps. Until next time, keep crafting. 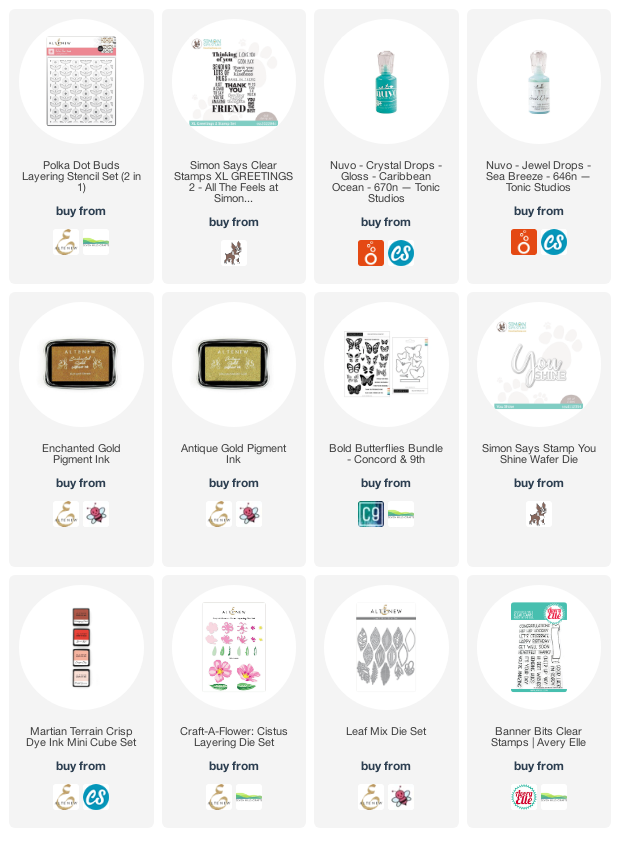